The new war memorial commemorating the men of Artington who died in both world wars has been completed and dedicated. It is built into the wall of St Francis's church in Littleton. It was the parish council that began the project but it was taken on by the Loseley estate that planned and funded the construction of the memorial.

The dedication took place on Tuesday 6th November 2018 and over fifty people attended the event, including the daughter and grandchildren of Ralph Hood whose research was the catalyst for the project (see below). Sadly, Mr Hodd has since died but members of his family were able to be present at the dedication.

A wreath from the parish was bought with some of the profit from the Big Lunch.

The names of the men killed in the Great War are listed on a framed list in the church and there are also two who died in the Second World War whose identities were discovered by Vicky Good.

Vicky has researched into the men of Artington who gave their lives in both wars and she has produced a booklet with biographies of them. She is now attempting to find information about all those men and women of the parish who served in the armed forces and Home Guard. The results will appear on this website in due course.

The idea for the memorial came about as the result of an email received by the parish clerk several years ago from Ralph Hodd who enquired if there was a memorial anywhere that listed his ancestor, Alfred White, who served in the Royal Field Artillery. As a result of the ensuing correspondence about 35 people attended a short service that was held at St Francis's church in June 2016 to commemorate Alfred and the other men listed on the memorial.

It seems particularly poignant that Alfred White was a pupil at the village school that was converted to become St Francis church in 1904.

An account of the 2016 event can be found in the Guildford Dragon, Guildford's online newspaper. 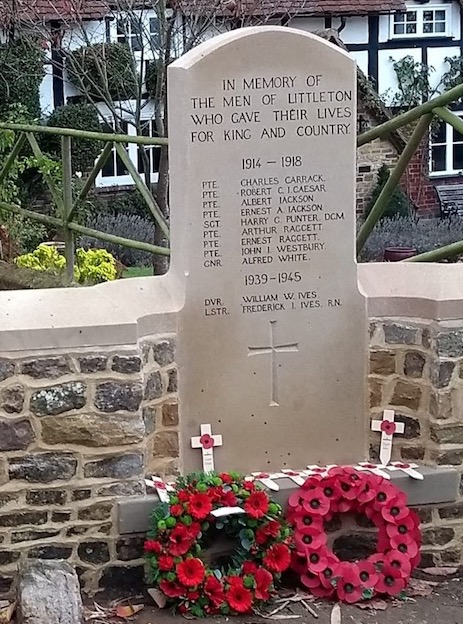